I rarely watch my own videos back. This time I kind of had to in order to be able to write a description. I may have had a few drinks – enough that I didn’t have a really clear memory of what I said.

This video covers Tony Abbott making a fool of himself (again) by awarding a knighthood to Prince Philip (even Andrew Bolt thinks it’s idiotic), the appalling obituary for Colleen McCullough published by Murdoch rag The Australian which essentially led by calling her fat and ugly, some idiocy from Murdoch’s Fox network and some real idiots who thinks pasteurisation of milk is bad despite their “raw milk” causing kids to be hospitalised and even dying.

I have to admit that I am having the most extreme case of schadenfreude imaginable as Tony Abbott implodes. I’m too drunk to go into much depth with this but to see someone who represents everything I despise go down in a screaming heap with nobody to blame but himself – well, it’s just delicious.

He has nobody undermining him. Gillard had to deal with Rudd being a total piece of shit from day one. Bot Abbott has nobody screwing him over – everything he’s done has been unforced errors.

I fucking love it!

Religious nut hell-bent on bringing about the end of days

You don’t have to know much about me to know I think climate change deniers are utter fuckwits. Science-denying, politically-motivated lying morons. I gave up even attempting to engage with these idiots years ago – it’s an utterly wasted effort. A mild example of their stupidity is this effort from Fox:

What global warming? Glad you asked, Fox. The fucking global warming that’s fucking happening fucking everywhere. “Winter” does not negate the science that proves climate change. I could try to explain the difference between climate and weather. Or I could just say fuck the fuck off you fucking fucks.

This is what passes for logic with these fools “it’s cold here at this very moment therefore climate change isn’t real.” I assume they also assert there is no hunger in the world while gorging on a huge meal and say there is no poverty while rolling around naked in piles of their Murdoch cash.

Seriously, those are things i assume they do.

It’s bad enough when media outlets vomit these lies. It’s worse when politicians do it. It’s far worse when politicians who have control over policy do it. Like US Republican senator James Inhofe who decreed that “Man can’t change climate.” Apparently only his magic friend who lives in the clouds can do that. Fuck science, he’s got an imaginary friend who’s really powerful. Oh, and he chairs the senate’s Environment and Public Works Committee.

We are so fucked.

Hey, why not lighten the mood with this classic from 2008:

Melissa McCarthy, Kristen Wiig, Leslie Jones and Kate McKinnon will be the stars of a remake/reboot of Ghostbusters. The fact that someone would dare to make a major film with all female leads was enough to make a whole bunch of fuckwits lose their mind. I don’t blame people who are sick of lame retreads / remakes / reboots / sequels but the morons who acted like they were justified in being seriously angry about an all female cast (while ignoring the approximately 90%of films with male leads) are some pretty shitty excuses for human beings.

I refuse to believe satire is dead

I remember after the terrorist attacks on the World Trade Centre on September 11th, the second stupidest response was a whole range of conservative pundits saying irony/satire was dead. The stupidest response was obviously to invade a country that had nothing to do with the attacks, waste trillions of dollars and kill about a million people. But they thought satire had been killed. We all had to be sincere now. These idiot showed a complete lack of understanding of the purpose of satire (often used to make an unbearable situation bearable). And human nature (at the darkest times, people want to laugh the most).

Plus, they were fuckwits.

These days, I occasionally think satire might have been killed by my primary targets being so fucking stupid they become almost impossible to satirise. The current Australian government has given me new material every single week of their existence and made it absurd easy to satirise their stupidity and evil. But Tony Abbott has pushed things so far that some, including First Dog On The Moon (who can be seen regularly in The Guardian), have speculated he’s now impossible to satirise. 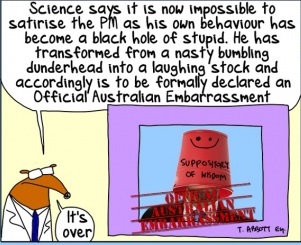 I’m still going to give it a red hot go. And in case you haven’t noticed, so is First Dog.

And in case you thought Tony Abbott was the only one trying to push the boundaries of stupidity to the point where it feels impossible to satirise them, ladies and gentlemen, I present for you Bill O’Reilly of Fox News:

If self awareness was a flame, Bill O’Reilly could stand in a lake of petrol in complete safety. Assuming I could resist the urge to hold him under until he drowned.

My special friend Daz, the most ‘Strayan bloke I know, Made a special video to pay tribute to Pauline Hanson’s contribution to Straya Day!

It’s Australia Day tomorrow and I’m probably going to spend most of the day at home indoors because that minimises my chance of seeing something that truly disgusts me. I really don’t get people who who demand absolute conformity from others on events like this. “Love it or leave it!” How about I’m pretty happy with the country as a place to live but I fucking hate you and everything you represent? My feelings about Australia are not tied up with the existence or hideous worldview of racist fuckwits.

And why do the idiots who bleat that anyone pointing out their censorship is “censoring” their “free speech” fly into a rage at anyone who dares to state a view that departs from their bigoted jingoistic bullshit. I honestly have trouble understanding how someone can be so fucking stupid as to say two such contradictory things so close to each other. “You’re not allowed to stop me denigrating aborigines but you’re also not allowed to say anything that even slightly criticises their flag waving fuckwittery.

So yeah, celebrate or not. Do what suits you. Just try not to be an arsehole about it. Or at least stay the fuck away from me.