You can find almost anything on YouTube. This particular bit of 90s lunacy is a favourite of mine. It’s definitely a specific sort of taste this appeals to – I don’t blame anyone who doesn’t like it. It’s quite abrasive and difficult to like.

I actually saw this at a house party in Sydney in the 90s (probably 94/95) while under the influence of certain hallucinogens which might explain why it imprinted on me so strongly (plus I have a soft spot for industrial techno). A lot of people’s favourite moment is Bush doing “We Will Rock You” (and that is good) but I really like Harrison Ford going “Get Down” repeatedly and the preacher really shook me.

By the way, a content note – if you’re vulnerable to something like a preacher repeatedly saying “I’m going to die” you might not want to watch that bit (it’s at about the 16:30 mark). At the time I remember thinking that would be a bit much for people who were already at risk of dark thoughts.

Two things stick with me: how difficult this would have been to create with 90s analogue technology. I haven’t bothered to look up anything about the creators but the fact they were able to access all of this material and edit it means they were probably working at a TV station. But that doesn’t account for the second thing that sticks with me:

How the hell did I see this on a VHS tape in Sydney – the other side of the world from the people who made it when it was NOT released as a commercial product?

This was pre-internet when things like this were spread by word of mouth and strange artifacts handed from person to person. We’ve lost something with the easy availability of almost everything but I certainly wouldn’t give up the modern world.

But the old world had a weird sort of magic.

A spectacular week for trump, even by the extreme standards set by the shitshow that is his administration. When your lawyer who’s been looking after all your dodgy deals for years gets raided, you’re in serious trouble. Also, he’s falling out of favour with some of his staunchest supporters for joining allies in a missile strike on Syria.

My promise: I won’t pander to people for popularity

While I’m sure that people I disagree with would say I’m pandering to people with the same opinion, there’s a difference between pandering and sharing an opinion. I’m sure it works against me in terms of viewers and subscribers on YouTube but I’m not going to shy away from potentially offending people in a misguided attempt to increase my popularity.

If I offend you feel free to point it out but be warned, there’s about a 99% chance I offended you on purpose and don’t give a shit how you feel. If you can’t respect me having a different opinion I don’t really give a shit about you.

Plus, I’m not going to tone down my delivery – this is my therapy.

No, not that sort of Angry Bird. There’s an Indian Mynah Bird that has decided it doesn’t like me so I decided to catch it on video. 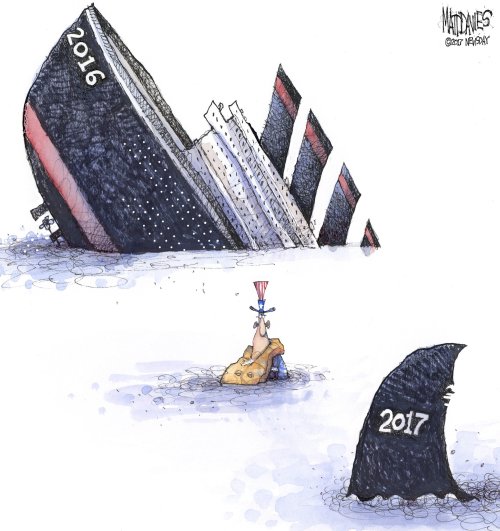 As we enter 2017 I figure, why not use this arbitrary moment to set some new goals? This is not a new year’s resolution as such but I want to reinvent/reinvigorate my online content this year and setting arbitrary tasks often helps me complete things.

The title of this blog, Angry 365 Days a Year, reflects the task I set myself in the first year of the blog’s creation: post something (hopefully angry) every day for a year. I actually achieved that goal so why not set myself the goal of repeating that feat this year?

Actually I can think of several reasons not to do that but we won’t listen to those negative voices.

This should be much easier than the first time. With the advances in technology I can post from my mobile so I don’t have to find a computer with an internet connection if I’m on the road. Plus, I have more practice in creating content (this was my first attempt at serious online content) so it isn’t an unknown to me.

I can’t promise you 365 days of brilliance but I think there will be some gems in there. I hope you come along for the ride.

I celebrated St Patrick’s Day this year with some traditional Irish potato spirit – poitin/poteen. I even coloured it green with the help of some limes.

“Freedom Commissioner” burns through $77,000 in expenses in one year

One of the thousand or so examples of the Abbott government’s trolling and hypocrisy is the appointment of someone who hates human rights to the Human Rights Commission with the clearly stated purpose of derailing the focus on crazy things like human rights. The hypocrisy really comes to the fore when you look at someone from a group that decries public spending living large on about $400,000 in taxpayer’s money.

My favourite part of this article was when he said “You’d rather I sit in my office all day?”

You really don’t want to know what I want you to do, Timbo.