Melissa McCarthy, Kristen Wiig, Leslie Jones and Kate McKinnon will be the stars of a remake/reboot of Ghostbusters. The fact that someone would dare to make a major film with all female leads was enough to make a whole bunch of fuckwits lose their mind. I don’t blame people who are sick of lame retreads / remakes / reboots / sequels but the morons who acted like they were justified in being seriously angry about an all female cast (while ignoring the approximately 90%of films with male leads) are some pretty shitty excuses for human beings.

Why is the Australian film industry so shit?

Millions of taxpayer dollars are flushed down the toilet that is the Australian film industry every year for very little return. The situation is so dire, when there’s an Australian film that actually succeeds, it’s like a bolt out of the blue. Russell Crowe’s “The Water Diviner” (it’s his directorial debut and he’s the star) became the highest grossing Australian film of 2014 and it wasn’t released until Boxing Day. Let that sink in – Rusty blew away the competition in six days. By a HUGE margin. 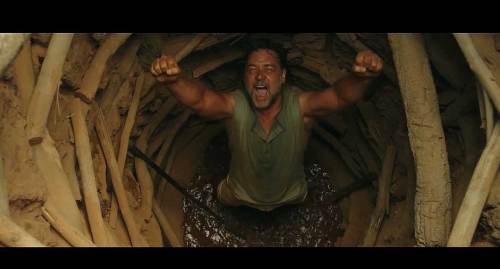 YES! I found a way to make a successful Australian film!

And the most disturbing thing is that the huge secret of his success is he made a film that was enjoyable for the audience. A lot of Australian films are very well made technically but don’t deliver a satisfying experience to audiences. Australian film crews and production teams are among the best in the world but the people who make decisions about what films get made and how they are made make a lot of really shit decisions. The result is talented people make films nobody wants to see.

As an example, I recently saw a slightly older Australian film (from 2007) – “Noise”. I’d been wanting to watch this for ages because it’s about a character with tinnitus. I’m not joking, I suffer from severe tinnitus and the idea of a tinnitus hero appealed to me.

Without giving away too much, the film starts with all the passengers on a train carriage being murdered. There’s one witness who for some reason is spared by the killer. Our protagonist with the ringing in his ears (played by Brendan Cowell – his first lead role and he’s great) is a bit of a fuck up and he has to spend his days in a caravan/mobile police station liaising with the public. He ends up becoming more central to the murder investigation than he would have imagined, including spending some time with the witness. He also maybe uncovers an important clue through his dealings with an “interesting” local.

It’s a beautifully made film, it looks great, sounds great (the simulations of tinnitus are very accurate – horrifyingly so for me), the performances are great and I was really engaged with the plot and characters. So by the end of the film, there are four big questions: what (if anything) does the clue reveal, who is the killer, what will happen to the witness and what will happen to our hero?

And absolutely NONE of these are resolved. None. Nada. Nothing. Fuck all. I shit you not. it just fucking ends with no resolution. You know why this film failed? Because nobody is going to recommend it to others. Nobody is going to say to their friends “You should go and see this film because i really enjoyed it RIGHT UP TO THE POINT IT TOOK A MASSIVE SHIT RIGHT IN MY OPEN MOUTH!”

Seriously, they could have resolved ALL of this with about 5 extra minutes of film. I’m not exaggerating. They were so close to a satisfying ending when the film just stopped. Because fuck the audience, the film makers are artists!

Or some equally vapid shit.

Help! I’m scared of an audience that wants a satisfying film experience.