I am always blown away by the work DrakeMagnum does for me (it features on the backrops I use for videos and several t-shirts) and he’s just done this piece which makes for an awesome commemoration of the recent visit to Australia by my friend Cory AKA Mr Safety of SMP Films.

This piece is inspired by this video shot in Adelaide:

And just because I like theme, here are a few more DrakeMagnum designs: 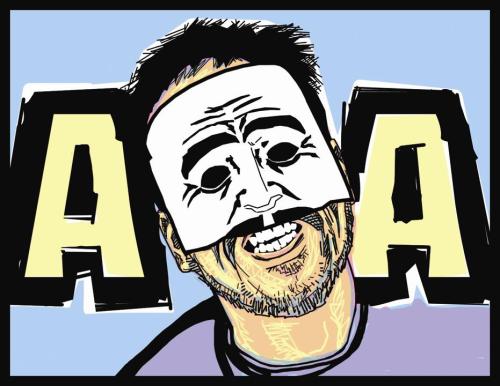 In many and indeed most cultures, the killing or assassination of enemies is sanctioned and sometimes even encouraged in their warrior traditions.

For example, the Bushido holds that the warrior is as a cherry blossom – brief and beautiful and doomed. Comparable to the beliefs of the Amerindians whose mantra of “Today is a good day to die” propelled the warrior into a state of selfless focus and allowed him to kill guiltlessly without fear of death.

Consider the desert assassins from Arabia and Africa – their technique was to become the wind and the sand, assuming an elemental aspect similar to the Shaolin monks whose reverence for life is suspended while they were a force of nature.

Of course, in a lot of cases, such as the Incas and Aztecs, killing became ordained. Made holy by sacrifice and sacred duty. As with the chivalric knights Templar, a vigil or prayer and fasting is observed before the killing, making it a de facto church execution thus guaranteeing absolution from sin.

Mr Lurksalot has his own philosophy:

Thinking I could make a living by making online content, specifically YouTube videos, was not a terrible idea. I may have jumped the gun with giving up a regular day job as the revenue growth from YouTube has so far been less than stellar. Good, but not enough to support me full time. So I’ll probably have to go back to a day job after Christmas.

That’s a real middle class white man’s problem, isn’t it? Complaining that I might have to work for a living like everyone else. Ignoring the huge number of people who don’t even have that as an option, who face a real struggle when they look for employment.

But that’s my problem so sod it.

And I’m a little more frustrated than usual because of system failures tonight. Sat down to edit a video and the software keeps crashing before I can start. Windows does this shit. This problem usually happens straight after a Windows “update” but the glitch usually works itself out after a few restarts. Or in a day or so.

It’s kind of tragic that in this modern age one of the most common technical fixes is still “Have you tried turning it off and on again?” So until that works, no new videos. In lieu of a video, here’s a photo: 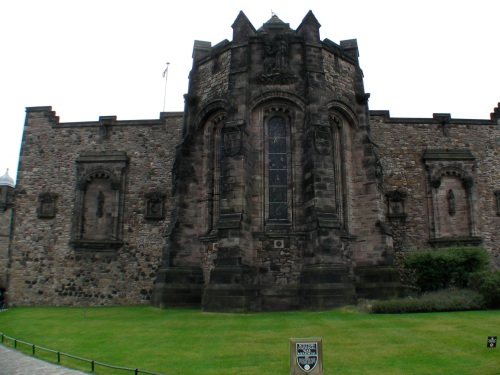 I really enjoyed my recent trip to England.

I thought I’d see how many Three Letter Acronyms I could squeeze into the title. For my Weekly TFU (Totally Fucked Up) Friday video, the central story I commented on was the new invasive “security” procedures being put in place at airports in the USA by the TSA. There are many reasons this is TFU – it doesn’t work, it’s being abused and there are much less invasive options that would work better.

What interests me is that the TSA may have finally pushed things too far. All of their bullshit procedures have been more about theatre than effectiveness – it seems the appearance of doing something is more important than actually doing something effective. But this seems to be the tipping point. I’ve never seen so much negative press and threats of public revolt at any of their other ridiculous charades. All of which is leading up to a proposed Opt Out Day. And some truly inventive suggestions for revenge.

An unexpected bonus was when an excerpt from this video was used to illustrate a story on CNN. Seeing as that is unlikely to be a permanent link, plus my appearance is so brief you might miss it if you blink, here’s a screen grab to prove I was there: 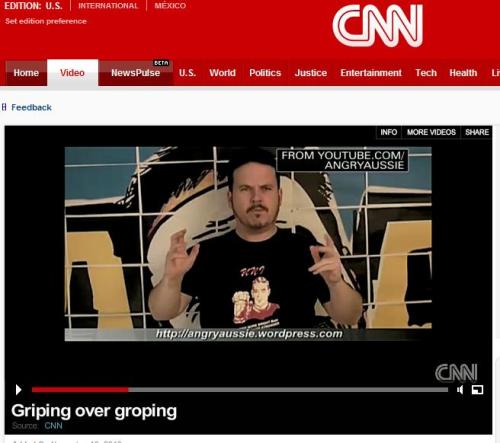 This is about the fourth time this presenter, Jeanne Moos, has used one of my videos to illustrate one of her stories (she does the “off beat” stories). I should make friends with her – maybe I can get a whole video on CNN one day.

I went to Adelaide recently – my first visit to the city and now I can finally say I’ve been to every state and territory capital city in Australia. Go me! There were two puposes to the trip. One was to go to the wedding of these fine people: 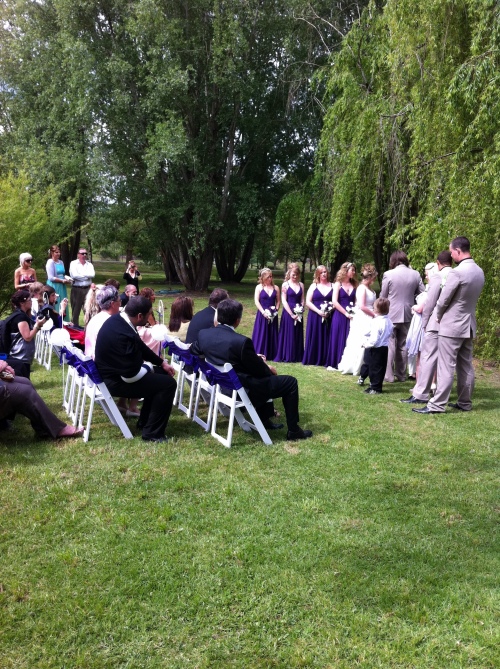 The second was to meet up with my long time YouTube friend, Cory Williams AKA Mr Safety of SMP Films. We saw dolphins:

We also collaborated on quite a few videos which will be appearing soon. I think we both agreed that in a perfect world I’d travel to the states once a year and he’d travel here once a year so we could work together every six months. But to make that work I need to either earn a lot more or get a wealthy benefactor. In the meantime, here’s an emu!